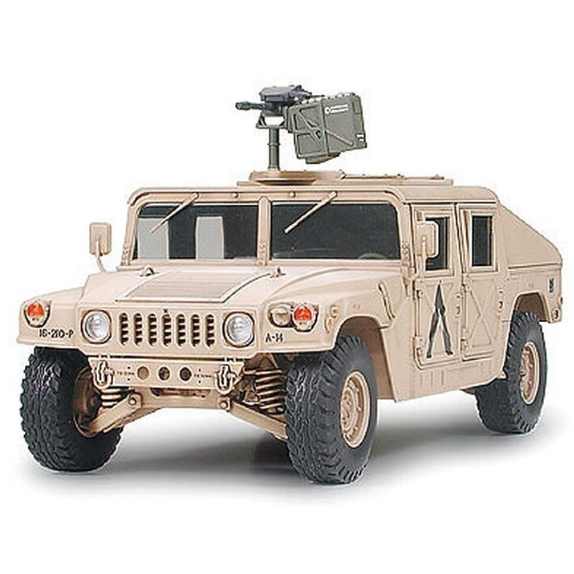 During the late 1970"s, the US Military worked at incorporating the functions of numerous military vehicles such as the M151 MUTT and M561 "Gamma Goat" into one unified design. Adequately named (HMMW) High Mobility Multipurpose Wheeled Vehicle, this vehicle would be designed for durability, superior off-road handling, and versatility. The M1025 could be equipped with M2 or M60 machine guns, as well as MK.19 grenade launchers. This famous vehicle is now part of the Tamiya"s Military Miniature Series.
The US Military"s M1025 Humvee was painted the same as NATO vehicles, in green, black and brown camouflage. However, for desert operations during conflicts in the Middle East, such as those in the Gulf War, monotone sand-colored camouflage was applied.

After the US Military ran a thorough comparative analysis on prototypes developed by three different companies, the XM998 prototype of AM General was found to be not only the lightest, but also to exhibit performance levels beyond expectation. The Humvee features an aluminum body reinforced with a sturdy steel frame. Employing a V8 diesel engine capable of 150hp output as well as an advanced 4WD system, automatic transmission, and power steering. Depending on its variation and employment type, the Humvee, deployed by the US Military in 1985, can serve as a cargo or troop transport vehicle, armament carrier, TOW anti-tank missile or ground-to-air missile employing vehicle, rescue vehicle, and more. The M1025 was fitted for armament, but unlike some of its armed predecessors, the M1025 featured a metal roof in place of a canvas roof and door. The M1025 could be equipped with M2 or M60 machine guns, as well as MK.19 grenade launchers. The Humvee first was deployed to the Panama conflict and later demonstrated incredible mobility during its deployment in the Gulf War. The HUMVEE also was deployed to conflicts in Bosnia and Kosovo. Currently, this vehicle plays an indispensable role in the U.S. Military.


Choose your configuration:
The parts have been designed to allow you to choose between various configurations. Moreover, various optional parts such as 2 types of bonnet vents, 2 types of mufflers are included. With these parts, you can represent not only US Army vehicles but also US Marine Corps vehicles.